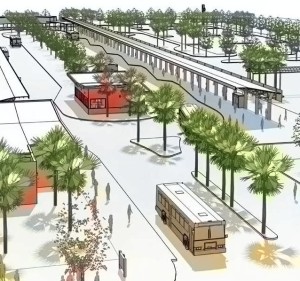 The Miami-Dade Expressway Authority (MDX) recently began work on a massive new project that’s at least partially aimed at getting drivers to ditch their vehicles. Officially called Dolphin Station Park and Ride Transit Terminal Facility, it is being built to accommodate up to twelve buses and it will contain over 750 parking spaces for commuters.

The new park and ride station will be located close to the junction of State Road 836 and the Florida Turnpike Homestead Extension. The project is a collective effort by MDX, the Miami-Dade County Department of Transportation and Public Works, and the Florida Department of Transportation to encourage mass transit in a region where the majority of people prefer to drive their car.

Dolphin Station will function as a transit hub for the 836 express bus service, focused largely on riders from areas in West Miami-Dade that need to travel to places like the downtown and Brickell areas, Miami International Airport, and the Jackson hospital district. The station will have a total of 849 long-term parking spaces plus twenty short-term spaces. The station will also include a retail area, a break lounge for drivers and even a convenient area for drop-offs.

Assuming construction goes according to plan, Dolphin Station is scheduled to be completed in December of this year.