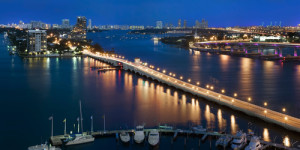 Do you live, travel, or commute to Miami Beach often?  Depending on how long you’ve been visiting or living in the barrier island, you may be aware of the closure of the Venetian Causeway.  As one of the three major roadways connecting Miami Beach to the neighboring city of Miami, its closure last year caused traffic tie-ups for a nine month period as drivers had one less method of getting on and off the island.  Thankfully, the causeway has officially reopened and is newly improved.

The Venetian Causeway closed in June to undergo extensive repairs and improvements.  Prior to these improvements, drivers may have noticed the large metal plates that were meant as a temporary means of fixing some of the causeway’s weaker spots, but those are now gone. Any chunks that were left over from the causeway project—over 720 feet was demolished and rebuilt—were submerged and are now part of an artificial reef.  With the new improvements, the Venetian Causeway should last about sixty years according to Miami-Dade County officials.

The Venetian Causeway is listed on the National Register of Historic Places and is known for its popularity among runners and cyclists.  The causeway intersects six upscale neighborhoods better known as the Venetian Islands.