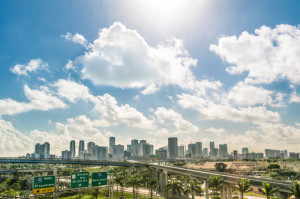 Those of you that take the southbound Palmetto Expressway (also known as State Road 826) frequently may have noticed a major change. After extensive work, the express lanes are officially open. Stretching for thirteen miles from West Flagler Street to just north of Northwest 154th Street, and at I-75 to Northwest 170th Street, these express lanes are intended to ease traffic for drivers willing to pay a premium by allowing them to move quickly through the highway away from the free lanes which move slower.

Similar to their I-95 siblings (which locals refer to as the “Lexus Lanes”), the Palmetto express lanes will charge tolls based on the flow of traffic, which is paid for using SunPass. Drivers that frequently travel the I-95 express lanes know that the tolls can cost over $10 during the rush hour period. It’s also worth noting that these express lanes end at certain points which means drivers should be aware of where they are going so as not to become one of those drivers that illegally plow through the barriers and become a safety risk after realizing they are going to miss their exit.

What are your thoughts on the Palmetto express lanes? Do you think they will help with easing congestion?