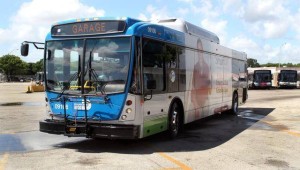 When you’re driving on the Florida roadways, chances are you’ve had to stop behind a city bus at some  point as it picks up passengers. These necessary stops can cause potentially large delays in traffic as drivers wait for the bus to move again, which could take up to a minute or more.

This very situation was becoming a problem over in Miami Gardens Drive where commuters were finding themselves getting stuck behind buses that weren’t going anywhere since the driver was, in fact, taking a break. What’s worse, the problem was happening mostly during rush hour. This meant that there was essentially one lane of traffic being lost, leaving drivers only two lanes to navigate during a time when congestion is typically heavy. Drivers also found themselves having to negotiate around these parked buses, potentially causing unnecessary risks on top of the delays.

Bus drivers parked in these spots on Miami Gardens Drive were simply parking where the Miami-Dade transit department was telling them to park during a driver layover, but thankfully the situation has been rectified by the department so that the drivers are no longer causing traffic backups, at least not on this particular roadway.

Have you ever had a problem with these buses parked on Miami Gardens Drive or another Miami roadway?