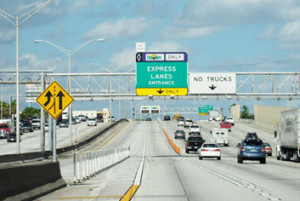 The Interstate 95 (I-95) express lanes have become a preferred method of getting around and avoiding the daily standstills that happen during rush hour. In fact, they’re so popular and require enough maintenance that the toll can cost up to $10.50 to ride it.

However, the express lanes have also become notorious for their safety concerns which include not only their narrowness but also the ongoing problem of impatient drivers. These drivers intentionally plow down the plastic poles to dart into the lanes to avoid paying the toll, avoid traffic, or because they entered the lanes unaware that the lanes end at specific areas and they cannot legally exit until a certain point. In fact, you can see several of the poles either missing or knocked down on a daily basis. Because of these drivers suddenly darting illegally into the lanes, drivers are often forced to slam on the brakes which could lead to an accident.

To address the ongoing I-95 express safety concerns, the Florida Department of Transportation (FDOT) and the Florida Highway Patrol (FHP) has announced that each and every one of the plastic poles on the highway will be replaced throughout Miami-Dade County. These new poles are intended to be sturdier and will be placed at five feet apart instead of ten feet in an effort to deter drivers from cutting in and out.

If you’ve traveled on I-95 express, have you ever dealt with a driver darting illegally in front of you?