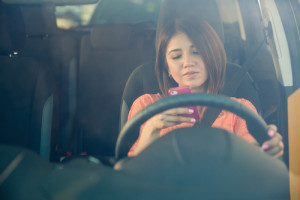 It’s already been proven that Miami’s traffic is among the worst in the country, among the top ten worst in fact.  The status isn’t due to the vehicles as it is the road conditions, lack of effective widespread public transportation, and of course the Miami drivers.  Let’s take a look at some of the people that may be contributing to the Magic City’s ongoing traffic woes.

We all know that distracted driving remains a major problem on the roadways, and if you ever happen to take a quick glance to your side or check out your rearview mirror, chances are you’ll see a driver focusing on his or her mobile device instead of concentrating on the road.

In Miami you’ll see a high number of merging lanes, and on busy days it’s not unusual to deal with drivers that either speed up or slow down in an attempt to not let the other driver into the merging lane even though merging is inevitable.  On that note, drivers that attempt to cut in front of everyone when making a left turn also cause traffic tie-ups.

Road rage is also a major problem, and you’re bound to see a driver blaring their horn at someone because they’re not driving as fast as they believe they should.  However, there are exceptions to this like the drivers that are frequently driving slow in the faster lanes, often because they’re too busy being distracted.