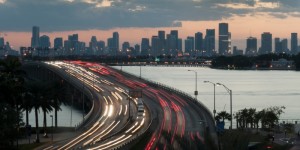 For the majority of South Floridians, being stuck in traffic is simply a part of everyday life.  Highways like I-95 and 836 can slow to a crawl in the mornings and afternoons, testing the patience of numerous drivers.  While it’s often been suspected, a recent study by popular GPS manufacturer TomTom confirms what many already know: Miami’s traffic is among the worst.

Miami came in seventh place in a list of cities with the country’s worst traffic congestion, ranking higher than other cities in Florida like Jacksonville, Tampa, and Orlando which came in at 38th, 15th, and 16th place, respectively.  Since TomTom began compiling the list in 2008, Miami’s traffic congestion woes have only continued to get worse with each passing year.

Miami’s placement was calculated by comparing the time of travel from an hour when traffic is non-existent to the rest of the day.  Miami received a rating of 28 which translates to a 28 percent longer drive when there are vehicles on the roadways as opposed to when the roads are empty.  While that number may seem low, it catapults to more than 40 percent during the morning rush hour and gets even worse in the evening.

The next time you’re on the Miami roadways during rush hour, always bring along plenty of patience and be careful to avoid the inevitable road rage driver.