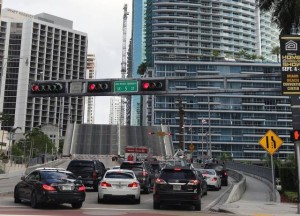 Miami’s traffic woes haven’t shown any signs of becoming any less problematic and congestion has become a given at just about any time of day. Despite the traffic situation, Miami-Dade County has promised to improve congestion by synchronizing its signals, a commitment it’s made as far back as the 1970s. County commissioners still cite the fact that trouble spots like US1 and 17th Avenue remain trouble spots that quickly become gridlocked by the late morning hours.

Miami-Dade’s Transit and Mobility Services Committee recently came together and managed to agree on a new traffic signals coordination contract, one step in Miami’s ongoing efforts to try and ease congestion. The county’s Transportation and Public Works Department is also in the process of adding technology that can pinpoint where major problems are happening and relay that information back in real time to synchronize the signals, this technology is part of what’s called the Advanced Traffic Management System (ATMS).

Once the ATMS is fully deployed, it will be able to synchronize every signal across Miami-Dade County, allowing video monitoring. The system is intended to replace the antiquated urban traffic control system that was phased out in 2012.

While the ATMS rollout is gradual, there are signs that Miami-Dade remains committed to tackling its ongoing traffic congestion.