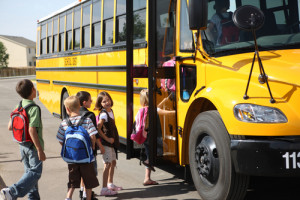 For many school age children in South Florida, the days of summer are winding down and they will be returning next week to begin the 2016-2017 school year. The roads are about to become much busier as bus drivers prepare to bring children to and from school.

Though school will officially begin next week, bus drivers have been preparing for months. In fact, Miami-Dade County bus drivers participated in an extensive training consisting of forty hours in a classroom and an additional forty hours behind the wheel. Just yesterday, bus drivers were given their school routes to familiarize themselves before the roads become clogged with fellow drivers and parents taking their kids to their first day of school.

There are over 1,100 school buses in Miami-Dade County alone, transporting more than 50,000 students on a daily basis across 900+ different routes. To make traveling these routes more efficient, sixty additional GPS units were installed on buses, which means a total of 852 buses in Miami-Dade County now have this incredibly useful feature that also allows administrators to keep tabs on a bus and its route progress.

With the new school year about to commence, it’s also a good opportunity for drivers to remember the laws that must be followed when it comes to school buses. Should the bus come a stop, the driver is also expected to stop, especially if the arm is about to extend.