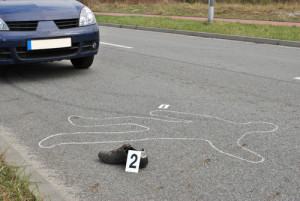 Did you know that Miami-Dade and Broward County have the highest number of hit and run crashes and fatalities in the state as well as pedestrian fatalities?  The Florida Highway Patrol (FHP) reports that the high numbers have remained alarmingly steady for the past several years.

Last year, Miami-Dade County’s fatal hit and run crashes were three times as much as any of the other counties in the state of Florida.  Drivers continue to fail to realize that it is against the law to leave the scene of an accident and that if they do, they face up to a minimum of four years in jail if they are caught.

Of course the biggest problem with enforcing the surfeit of hit and run drivers is arresting them, and that’s where FHP officials say that residents should speak up and report if they see something going on.  Efforts to appeal to the conscience of a driver that has committed a hit and run can only go so far.

There is also a discrepancy involving the sentencing between charges involving a DUI and leaving the scene of an accident, which may also be a factor in why impaired drivers choose to flee the scene instead of staying.  Changes in Florida’s laws are aimed at making the sentences similar to each other, reducing the chances that a drunk driver would flee since it’s simply not worth it.