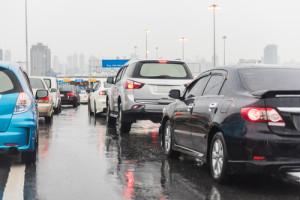 Lane diving is a term used for someone who is driving on any highway and dives into two to three lanes at once. This is sometimes done without the drivers checking their surroundings. The drivers simply just dive into another lane without fearing the consequences. Lane diving has become such a reckless cause of accidents that counties such as Broward are imposing minimum fines of $165 to whomever is lane diving on I-95.

South Florida is cracking down on “lane-diving” not only by fines but by replacing the poles on the express lanes. These poles are usually skinny and divide the normal lanes from the express lanes. In September, crews began replacing I-95’s existing poles with a sturdier design and doubling the number of poles.

A major lane diving accident just occurred on November 6. A driver attempting to lane dive from the I-95 express lanes to the general-purpose lanes sparked a fiery crash that sent six people to the hospital, three of whom are in critical condition. This is just one out of many lane diving accidents that have occurred over the years in South Florida.

This update is brought to you by Miami traffic attorney Hochman & Goldin, P.A. We can assist you with criminal traffic violations and are ready to answer your questions. Please call 305-515-5045 to speak with a Miami expungement attorney.