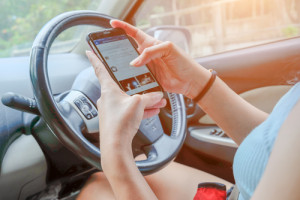 Are you fed up with drivers endangering the roads as they text? You’re going to have to put up with it for at least another year. Several bills aimed at distracted driving that were up for Florida Legislature review didn’t even make it to a hearing.

Some of the bills that failed to see any progress were HB 47 which would have given police the authority to ticket drivers caught texting while driving in a school zone. A law that would have allowed law enforcement to pull over drivers age 18 and under caught texting behind the wheel also failed to gain any traction.

And so, with little progress made towards stricter texting while driving laws, it will remain a secondary offense in the state of Florida. In case you don’t know what this means, it means a law enforcement officer must see the driver commit a primary offense such as running a stop sign or speeding before they are allowed to receive a texting citation.