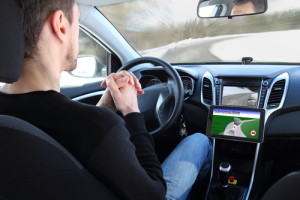 Just about everyone agrees that Florida traffic is a nightmare that only continues to get worse, but opinions tend to differ in terms of how to address the problem.  Is increasing public transportation the best way to go?  Maybe the roads should be widened.  Or perhaps the solution is what’s called “smarter roads”.

Over in Tampa, the city’s Hillsborough Expressway Authority (THEA) is currently devising a project called “Connected Vehicles” that will eventually be rolled out on the Selmon Expressway.  The project would allow vehicles to communicate with each other and the neighboring infrastructure.  The technology behind the project could eventually improve upon driverless cars.

Florida Governor Rick Scott recently gave the okay on a bill that could make the project a reality.  Florida’s annual transportation budget bill included terms allowing “autonomous vehicles” to be deployed and tested on the state roadways, removing the necessity to include a driver provided all federal safety standards and regulations are met.  With this new bill, it’s expected that Florida will receive millions, if not billions of federal dollars and it could create a significant amount of jobs.

For the time being, driverless cars are not available for purchase to the public, but they can ride one…in Tampa. Could self-driving cars be the solution to Miami’s traffic woes?