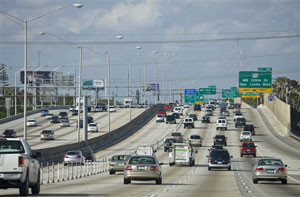 Per the 2016 Report Card for Florida’s Infrastructure by the American Society of Civil Engineers, the roads have failed to keep up with the growing population demand. The report states that the Florida Department of Transportation (FDOT) has “fallen behind the curve” and that cities and counties have also failed to keep up.  The report gives Florida a letter grade of C, which is still a bit of an upgrade from its grade of C- back in 2012.

During the past three decades Florida’s highway miles have increased by a quarter but despite the greater number of miles, the miles driven has also nearly doubled, per the report. Cities like tourist friendly Orlando and its metro area are among the state’s fastest growing cities with a population gain of over 45,000 people just between 2014 and 2015 according to the Census Bureau.

While road network improvements remain ongoing, the report also sheds light on the state’s public transportation and the lack of people that use it. A mere two percent of Florida drivers use public transit during their commute.

If there is perhaps some good news coming from the report, Florida’s grade managed to be better than the grade of D given to the nation at large.

How do you think Florida can go about expanding or improving its roads?