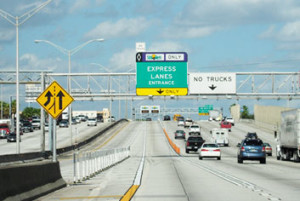 The I-95 Express Lanes are designed to make it easier for drivers to get around, avoiding the major traffic buildups that happen on a seemingly daily basis.  However, these Express Lanes can become notoriously slow, and what’s worse, quite dangerous.  The plastic orange poles that separate the Express Lanes from the general purpose lanes have done little to prevent drivers from weaving in or out of the lanes, leading to a number of accidents and even fatalities.

During the past three years, the Florida Highway Patrol (FHP) has reportedly responded to over 12,100 crashes on the Express Lanes.  A South Florida attorney is now looking to rally Florida drivers in an effort to demand that lawmakers take action and fix the Express Lanes situation, citing the many accidents and five fatalities that have occurred over the three year period.

The Express Lanes situation has affected not only drivers but also FHP troopers that are attempting to enforce the law.  The shoulder next to the Express Lanes is narrower, which makes it harder for a trooper to pull over a driver.  The FHP also has to grapple with the aforementioned drivers that weave into the Express Lanes and the department has hired additional troopers to address these drivers that cost the Florida Department of Transportation about $1 million a year having to replace the damaged or missing poles.

If you’re interested in signing the petition, visit www.change.org and search for ‘express lanes’, sans quotes.